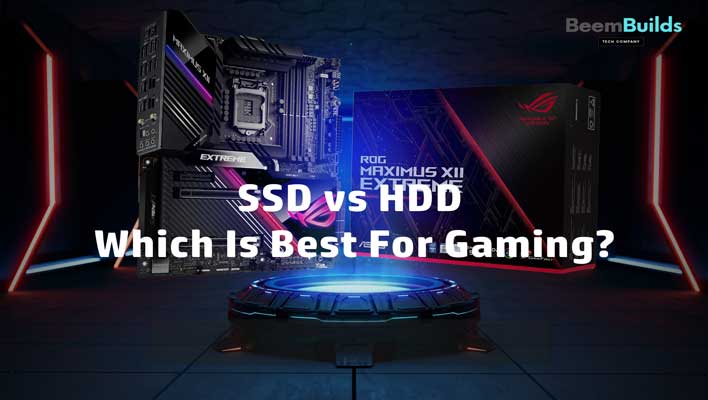 SSD vs HDD – which is better today? If you’re a gamer, take a look right here at our answer! You might be surprised by it!

Recent years have seen the popularity of solid-state drives soar, which is due to their astounding read/write speeds that have blown away traditional hard-disk drives.

It comes as no surprise that gamers all over the world have chosen SSDs as the best option for gaming because of their superior performance.

Then why are SSDs so much better than HDDs? 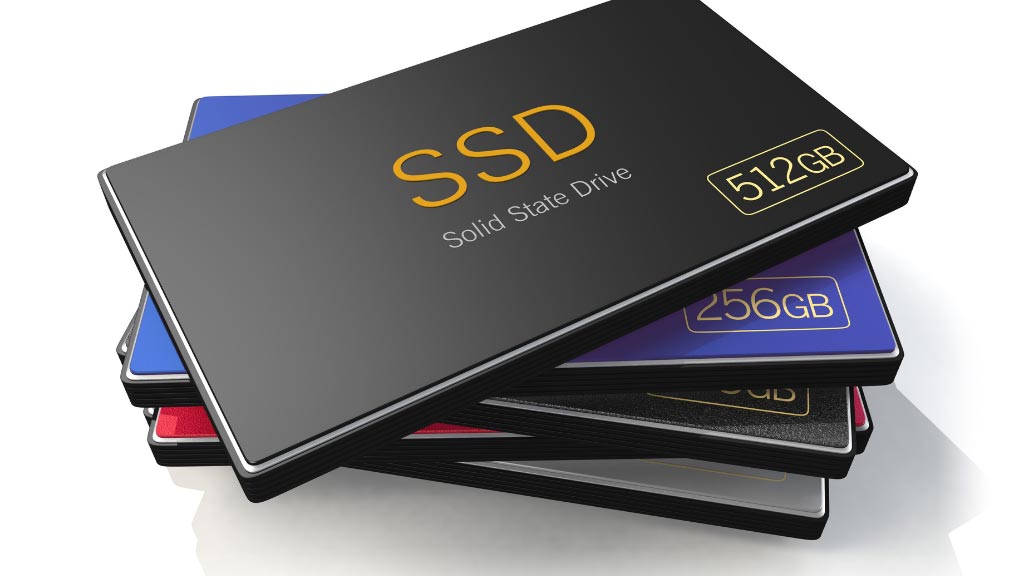 As part of this article, we will compare SSDs and HDDs on all the key fronts, discuss the pros and cons of both, and come to a decision about which is the best gaming PC solution.

A SSD is a great alternative to an HDD if you play games since it will reduce loading times, but it will also make the PC run smoother overall, due to the much faster boot times. 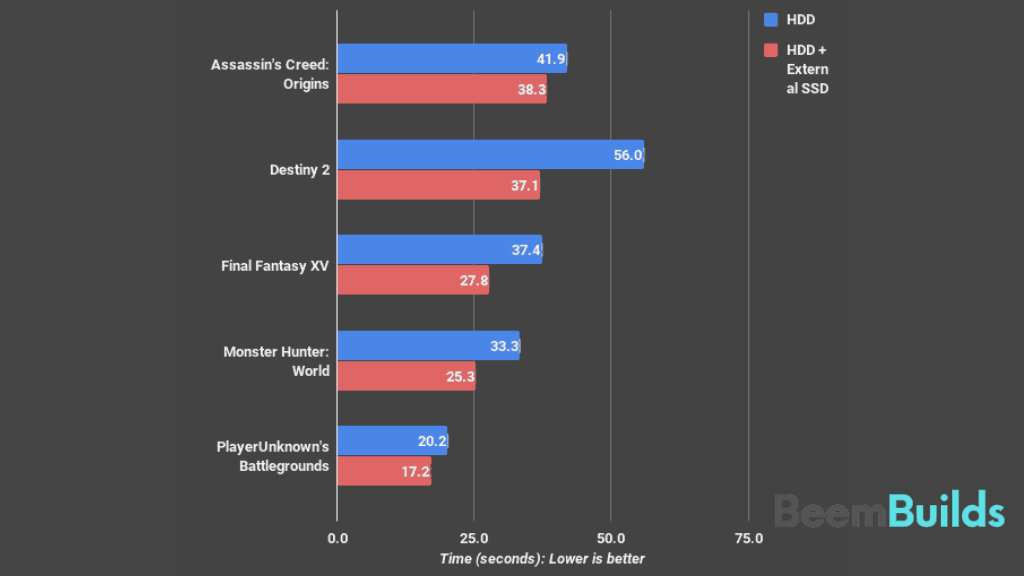 The lifespan of HDDs is generally longer than that of SSDs. Despite the gap in that regard, most users aren’t likely to be concerned, since hundreds of terabytes would have to be written to the SSD to make it “break.” Probably most users will upgrade far before they reach this limit.

SSDs are also a winner when it comes to durability.

SSDs do not contain moving parts, so external damage will not cause them to malfunction.

The HDD, on the other hand, features a spinning disk and a read/write head that moves. A HDD can be more easily damaged as a result of external shock because of this.

As we approach the spec sheet’s most important entry – the device’s storage capacity – let’s talk about it.

The latest cutting-edge SSDs will have storage capacities of up to 7.6 TB in 2023, while most will be in the 120 GB – 4 TB range. Hard disk drives are typically available in 500 GB to 8 TB sizes; however, models as large as 16 TB can be purchased as well.

Nevertheless, pricing is as important as capacity. More specifically, price per gigabyte. In this regard, HDDs clearly win out.

If you need a lot of storage, HDDs are a much better choice. 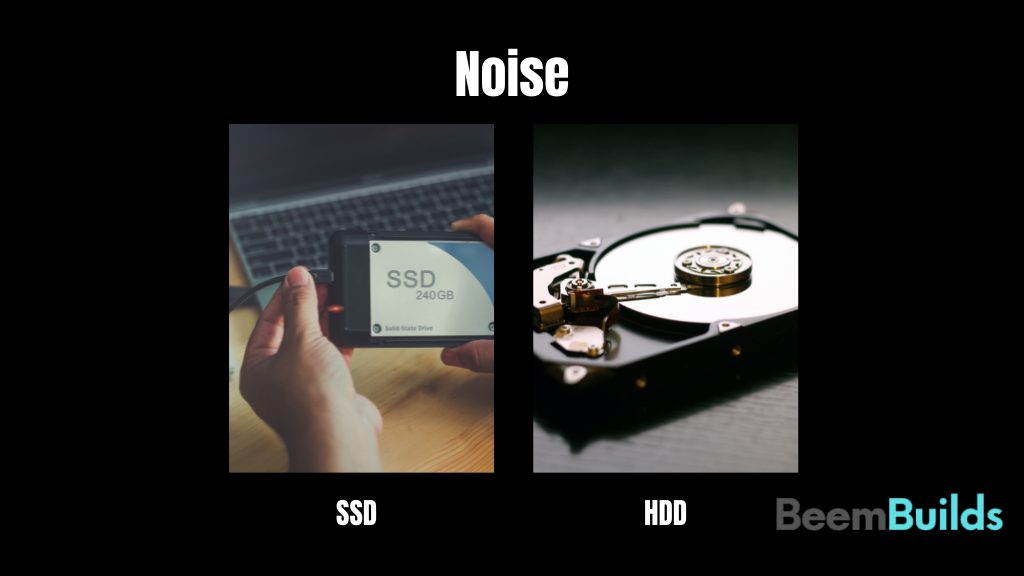 In addition to not having moving parts, solid-state drives do not have any. This makes them quiet. Contrary to this, HDDs tend to generate some noise, but not all HDDs are as loud as others.

An HDD’s noise level is mainly determined by these factors:

SSD vs HDD: Games and other data are getting larger and larger

Modern games include updates and add-ons that easily push the storage requirements beyond 200GB, as anyone with a digital video game library can attest to — think Call of Duty: Modern Warfare.

Considering that PCs such as the PlayStation 5, Xbox Series X, and Xbox Series S all support fast SSD storage, this will likely result in an increase in AAA titles’ file sizes. There are already some games which have exceeded 150GB in the next generation.

The typical installation size of a large modern game used to be 40-60GB, but today is more frequently 10GB or more following the release of patches, seasons, and updates. That’s the equivalent of 1/3 of a 1TB SSD! It’s good news that a 1TB-class SSD costs only $100, so even the biggest games will require you to dedicate about $10-$15 of storage. If you keep many installed games, that 1TB can quickly fill up.

There is more to life than fun and games. Backup and media storage are important aspects of life. Backing up your PC to high-performance SSD storage isn’t necessary. In the event you need to restore from a backup, that could be a time-saver, but restoring from a backup to begin with would be much more frustrating. Despite the reliability and durability of today’s HDDs, they are the best way to back up your precious data.

In terms of performance levels, SSDs and HDDs are often compared. Hard drives haven’t improved much in terms of speed or performance when we look at them in that context.

Hard disk drives were originally standardized at 7200 RPM, and they still are.

In contrast, with SSDs, the speeds have gotten a lot faster, even with M.2 SSDs and PCI-E SSDs.

So, SSDs clearly win over HDDs. 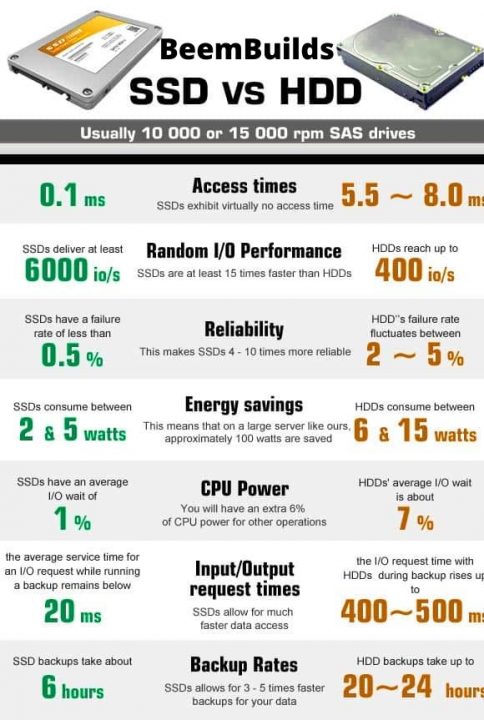 SSDs clearly win the SSD vs HDD battle after everything is taken into account.

SSDs and HDDs are incomparable when it comes to gaming performance.

With solid-state drives, gaming performance simply cannot be matched by traditional hard disk drives, and the industry is ready to move forward.

SSDs will be much more affordable in 2023 than they were just a few years ago. Moreover, the 9th generation of video game consoles, the Xbox Series X and PlayStation 5, will also use SSDs.

If you can afford it, then an SSD is something that you need to consider for your primary system drive.

The use of a smaller SSD as your primary drive and an HDD for storage is always an option if you are on a budget and need more storage than what an SSD can offer.

As a result, HDDs will still be your best choice if you value capacity over performance. HDDs will remain relevant in years to come as storage solutions. Accordingly, they provide much better value when it comes to storage.

A final note about portable external storage solutions: they have their advantages and disadvantages too. Despite SSDs’ rapid performance and resistance to external shock in 2023, HDDs will offer more storage for a lower price, while SSDs are expected to be faster and cheaper. Keeping this in mind is important when it comes to external storage.

Do HDDs or SSDs have a better gaming performance?

Good! As SSDs are a new technology and improve gaming performance, they are definitely a better choice. HDDs are great for other tasks and provide a decent performance in other areas, but SSDs are better for gaming. GTA V’s game will load in 20 to 30 seconds with SSD rather than 1 and a half minutes.

What is the best HDD for gaming?

All things considered, this is a great option for a budget-conscious gamer and will provide a decent gaming experience. SSDs, however, are the best option.

Which HDD is better for gaming?

According to experts who have conducted many benchmark tests, Seagate FireCuda 2TB is the best HDD for gaming. This hybrid drive offers SSD performance and HDD capacity.

What effect does SSD speed have on gaming?

Yes, generally. Compared to low-end games, you will not be able to tell a significant difference between loading screens.

How much RAM is enough for gaming?

Sure! The recommended amount of RAM is 8GB

Is it necessary to have both HDDs and SSDs?