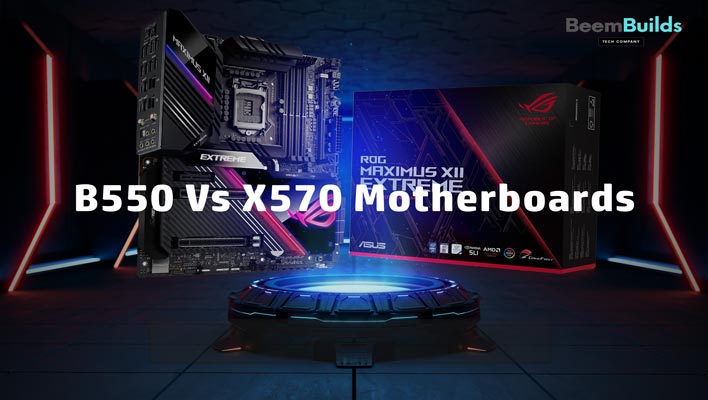 Updated: AMD Ryzen 5000 series processors can be used with motherboards with the B550 and X570 chipsets.

In the past year, AMD has seemingly halted the production of its latest B550 chipset motherboard several times, but now it is finally in the works. We thought it was time to examine the differences between the B550 and the X570 now that B550s are hitting retail shelves.

As a fact-based comparison article, we’ll examine the B550’s advantages in comparison to the X570 by comparing its specifications number-by-number.

Furthermore, we will answer some of the most commonly asked questions about the B550 motherboard and discuss how it might affect your gaming experience.

You can also read Best Motherboards for Ryzen 7 3700X

So with all this in mind, let’s jump right in! 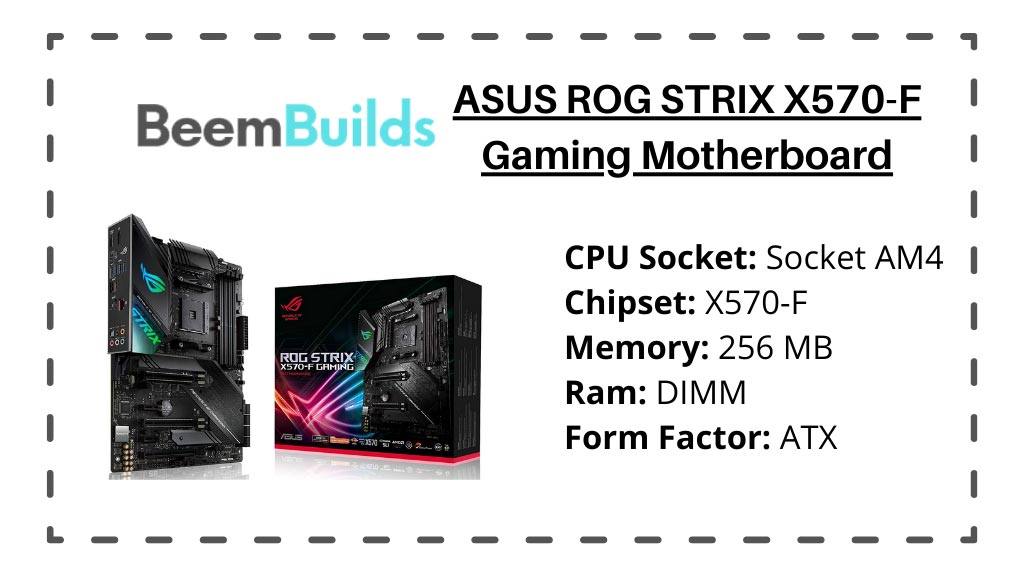 Our first task is to understand what a B550 motherboard is. As a result, it is essentially a motherboard with AMD’s latest chipset, a means of connecting the microprocessor to the rest of the board. Each motherboard can be classified according to its chipset, which brings with it its own set of advantages and disadvantages. Among the many benefits of a B550 motherboard that we will discuss in more detail shortly is the fact that it is compatible with Zen 3 CPUs (AMD 5000 series) with a quick BIOS update at launch. It will take until January for B450 owners to get their updates and take advantage of the new CPUs. You can also check Best Motherboard for Ryzen 7 1700x

B550s have been surrounded by a lot of buzz and speculation, as with most motherboards that feature a new chipset.

What are the differences between them and B450s? How will they differ from X570s? Is a B550 right for me? Questions like these have arisen since development began.

Now that we’ve done that, let’s find out how a B550 works from a technical standpoint.

Let’s begin at the beginning.

As you probably noticed, the two chipsets have a lot in common right off the bat.

In both cases, the CPU graphics support is PCIe Gen 4 x16, and the USB 3.2 Gen2 support is X16 PCIe Gen 4 x16. In addition, they both share dual GPU capabilities as well – although this capability is vastly underutilized today.

However, there are few similarities beyond that. There are differences when it comes to general-purpose lanes, since the B550 only supports PCIe Gen 3. Compared to the B550, the X570 offers PCIe Gen 4 general purpose lanes, as well as PCIe Gen 4 CPU chipset uplinks – a feature that is not available in the B550. From a numerical perspective, there isn’t a lot of difference between b550 and x570 chipsets.

In terms of technical specs, the difference between x570 and b550 are quite similar, but there is one area where they disagree: compatibility. AMD B550 chipset enables excellent compatibility and support for Ryzen 3000 (and beyond) CPUs, enabling AMD to develop a board for the future.

The B550 isn’t what you need if you have a Ryzen 2000 series (or older). Ryzen’s latest batch of APUs does not support B550s either, which makes matters even more confusing. While these APUs belong to the Ryzen 3000 series, they are not based on the Zen 2 architecture. B550s do not support the Zen+ architecture used by 3200G and 3400G. 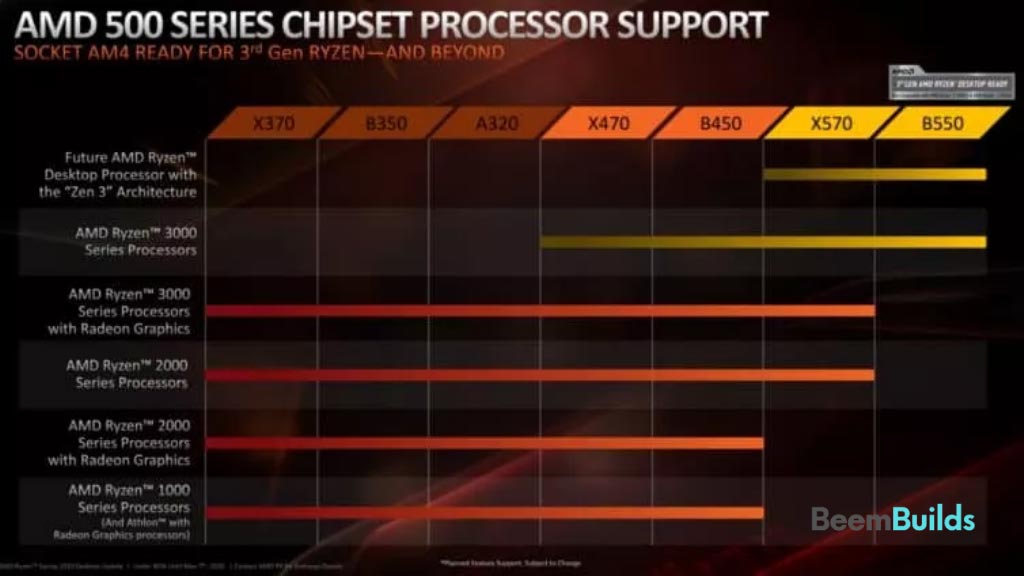 Differences between B550 and X570 Chipsets

Performance and overclocking (b550 vs x570 performance)

The X570 as well as the B550 support overclocking. VRMs on the X570 are slightly better than on B550 motherboards, despite the higher price.

The X570 chipset is capable of drawing 15W of power maximum because each PCIe lane is PCIe 4.0. Because of this, most motherboards with the chipset have a fan for cooling. This is not the case with the B550 chipset.

Dual graphics cards can be configured using Nvidia’s SLI or AMD’s CrossFire, so your motherboard and CPU need to support these. These features are available on both the X570 or B550 chipsets, however on some B550 motherboards, they are only available on premium and high-end models.

PCIe lanes are not the only option for connections: USB and SATA are equally important. There are up to 8 USB 10Gbps ports on the X570 Chipset whereas there are only 2 on the B550 Chipset. On the other hand, the B550 chipset has two USB 5Gbps ports, while the X570 chipset has none. Last but not least, there are only four USB 2.0 480Mbps ports on the X570 Chipset compared to six on the B550.

Last and most importantly, there is a price difference between motherboards. In comparison to B550 vs X570 motherboard options, X570 options are more expensive. It’s because the X570 uses PCIe 4.0 lanes (which require expensive PCBs), has a better voltage regulator, and has a cooling solution.

Adaptive to the future

Due to AMD’s upcoming Ryzen 6000 Series CPUs, the AM4 socket will be retired in favor of a newer AM5 socket. This means that motherboards such as the B550 and X570 will no longer be able to support AMD’s upcoming CPUs. Your question about what is the difference between b550 and x570 has been answered here.

Using a high-performance Ryzen 9 3900X or 3950X at stock speed requires a VRM to operate, since they play an important role in overclocking mid-range to high-end CPUs. What are the differences in VRMS between b550 motherboard vs x570?

The board is essentially responsible for cooling things down. An overclocked or high-end CPU can run better on a board with a better VRM. As expected, the enthusiast chipsets (X570) are supposed to have better VRMs than the B550 ones. A lot of this is true, as the highest-end X570 boards feature the absolute best VRMs on any AMD board.

This is the kicker; We are talking about very expensive, super-premium boards that simply aren’t worth the expense for the vast majority, and in the midrange board battle, which pits premium B550s against budget X570s, the former actually has much better VRMs. Benchmarks were performed on B550s and X570s by HardwareUnboxed (good, dependable source), The gist is that there are B550 boards with better VRMs under $200 (US) than equivalent-priced X570 boards like the X570 Gaming Edge WiFi. Yeah, We think it’s strange, given that B550 is the newer chipset (X570’s been out for a while now) and thus having augmented VRMs makes sense.

In addition to these examples, there are several affordable B550 motherboards that have better VRMs than budget X570 models. This means an X570 in this price category makes little sense as the B550 provides better cooling for the same price, whereas an X570 makes sense only if you need the benefits of the X570.

In either case, it has direct access to the graphics card or M.2 NVMe drive, so both chipsets support PCIe 4.0. A PCIe 4.0 GPU and at least one NVMe storage drive are supported by both the B550 and X570, so price is a consideration. You should choose a B550 Motherboard if you do not need PCIe 4.0 lanes, good VRMs, and overclocking support.

If you’re interested in PCIe 4.0, then the X570 is a great option. In addition, better VRMs allow you to overclock your Ryzen 7 and Ryzen 9 CPUs with sustained overclocking.

The B550 chipset was created primarily because of its price. Apparently, consumers were upset that they couldn’t access PCIe Gen 4 without purchasing an expensive X570 motherboard. Therefore, AMD decided to offer this cheaper alternative which not only supports AMD’s next-generation CPUs, but also supports PCIe Gen 4.

As a result, contrary to AMD’s claims of a lower cost, the B550 has appeared on the market with a confusing price tag: It’s almost the same as the X570. While the current state of the tech industry isn’t helping, I still think the price of B550s is too high – damaging AMD’s claims about PCIe Gen 4 affordability.

Let’s look at the outstanding X570 chipset. The following models are better and outright winners when compared to the B550 options.

Ultimately, I guess the big question is whether you should purchase the B550 chipset. We can remove immediately all users who are unwilling to upgrade their Ryzen 2000 series (and older) CPUs. A backward compatibility with the B550 is not expected in the future.

If you do not intend to upgrade to Zen 3 in the near future (or do not intend to use PCIe gen 4) then I would not recommend the B550. Several high-performance B450s are available in the market today that are suitable for you. There is no need to spend more on features you won’t use.

With that said, the B550 could be a viable option for consumers who have already set their sights on AMD’s future CPUs. The VRM design of the B550 is one of the features that will make heads turn. VRMs on the new motherboards are far more advanced than on their predecessors.

For users who wish to take advantage of every last drop of performance potential, this is a huge benefit. Aside from that, the B550s will cost between $30-70 less than their X570 cousins, so they are a great option for budget PC builders.

So, here it is, our complete explanation of the fundamental differences between the B550 and the X570. It must be said, after all the hype surrounding the launch of the B550 chipset, I was a bit underwhelmed by its features.

These boards could have been made a whole lot more exciting by manufacturers. However, there’s not much difference between these boards and the already-popular X570s.

AMD has finally responded to consumers’ cries for cheaper PCIe Gen 4 boards. The pricing of these new boards is so similar to that of the current X570s that I’m not sure whether I would recommend one for your next PC build.

There is no difference between the B550 and the X570. If we keep the specifications balanced, then the X570 wins over a high-end B550 motherboard.

In order to differentiate the B550 from the X570, PCIe Gen 4.0 lanes, slots, and drives are available in the B550. X570 also has a greater number of USB Type-C ports than the B550. These differences are described in the article’s beginning.

You need to consider the use case scenario. The B550 is your only choice if you have a low budget. The X570 is the best Ryzen 5000 processor for high-end users. Overclocking your PC using the X570 is your best option.

Interestingly, B550 chipsets are more recent. As of July 2019, the X570 chipset had been released, while the B550 chipset had been released almost a year later, in June 2020. The B550 does not have a better performance than the X570, by any means. Instead, the X570 motherboard chipset remains the king of AMD motherboard chipsets.

Along with PCIe Gen 4.0 CPU lanes, the X570 supports M.2 NVMe SSD drives and more Graphics Card slots. Onboard cooling is also included on the X570, which is not the case on the B550.