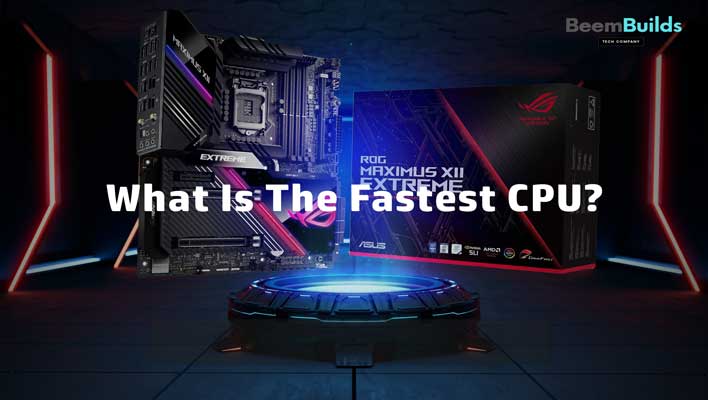 It is subjective to define the term “fastest” in relation to CPU’s, as most have proved capable of running various kinds of programs, including video games.

Since the creation of the personal computer in the 1980s, AMD and Intel Corp. have been the two largest manufacturers of central processing units (CPUs). AMD was the first company to develop the fastest desktop PC CPU years after Intel. The AMD FX processor brand was launched in 2011, and AMD CPUs from that line are considered to be the fastest. AMD’s TR 3990X is widely known for its high speed and multilevel cache memory unit which facilitate the performance.

Although most CPUs have proven efficient and effective running programs, including gaming programs, defining the term “fastest” regarding CPUs is subjective. If you are building or upgrading a desktop PC, choosing the right processor is the most important and challenging step. So, what is the fastest CPU on the market in 2023? Find out below.

Ryzen ThreadRipper 3990X processors offer a 64-core design and 128 threads, making them the world’s fastest desktop processors by 2023. Multitasking is facilitated and load times are fast thanks to the CPU’s 2.9 GHz base clock and 4.3 GHz maximum boost clock.

HEDT (High-End Desktop) processors, designed for professionals in video and visual effects, are AMD’s latest CPU. The TR 3990X offers 64-core performance and PCle 4.0 connectivity, so it is best suited to motherboards with sTRX4 TRX40 sockets.

It also incorporates multichannel RAM and SATA ports, as well as multi-GPU and NVMe RAID features. Unlike most CPUs, it has the AMD “Zen” architecture, higher clock speeds, more cores, and enhanced energy efficiency. In addition to its large GPU and quad-channel DDR4 memory, it has 64 cores and 128 threads, which makes it super fast.

In terms of specific processes, AMD’s Ryzen 9 5950X 3.4 GHz core is also a fast CPU, though a bit slower than a TR 3990X; both are available on the market. Multitasking on demanding applications is simplified by Ryzen 9 5950X’s 16 cores and 32 threads. With 16 cores and DDR4 RAM running at 3200 MHz, the AMD 5950X is compatible with PCle Gen 4 technology. It has a Thermal Design Power (TDP) of 105W, and is lacking a cooling unit. Ryzen 9 5950X also lacks a GPU, so users will need to first install an external graphics card.

Ryzen Threadripper 3990X, AMD’s latest desktop PC CPU, is faster thanks to its exclusive features as well as AMD’s newest improvements; however, it does not mean that Ryzen 9 5950X is slower and less reliable. Processors like the Ryzen TR 3990X can be superior in some programs and for executing certain operations, but they can also be slower. Ryzen TR 3990X has 64 cores and 128 threads, making it one of the fastest CPUs on the market today.

The Ryzen 9 5950X is the best gaming processor

Even though it is slower than the TR 3990X in everyday tasks, the Ryzen 9 5950X is one of the best CPUs for gaming. In addition to AMD StoreMI technology, Zen 3 architecture, Ryzen master utility, and VR-Ready premium capability, the CPU offers top-of-the-line gaming performance. Ryzen 9 5950X uses these latest technologies to dominate gaming in comparison to other CPUs such as the 5900X and the 5800X.

Businesses focused on gaming and computing operations with precision will find Ryzen 9 5950X an excellent choice. The Ryzen TR 3990X is a great choice for businesses that run everyday operations and need a high-performance desktop PC processor.

A number of CPUs with different speeds, power, and efficiency have emerged in 2023 as AMD continues to deliver highly efficient and fast CPUs. The TR 3990X processor, with 64 cores and 128 threads, is projected to be the fastest processor available by 2023. In terms of gaming performance, however, the 16-core/32 threads Ryzen 9 5950X processor provides exceptional results. A gaming experience with a high-speed Intel Core i9-10900k with 10 cores and 20 threads appears to be possible once again.

As for which CPU is the fastest on the market, the short answer is that it depends. Every CPU is designed to perform a specific function, so it does not stand out entirely from the rest. In 2023, AMD’s TR 3990X and Intel’s Core i9-10900k are considered the fastest, but there are some factors that prevent these from becoming the best on the market.

You may also love to read: Best Intel Processor for Gaming

With Intelice, you can choose the right CPU for your business

In addition to AMD and Intel Corp., there are several different processors available for desktop PCs. This makes choosing the right CPU difficult, particularly for startups and fast-growing businesses. When designing your company’s IT infrastructure, it is essential to consider speed, cache, and power.

At Intelice, we can help you choose a CPU that will perform at its best levels for your business. Your business benefits from the expertise of our IT professionals who deliver high-quality and reliable IT solutions. Besides, we understand how difficult it can be to pick the right processor from the hundreds available on the market for your desktop PC.

Your business continues to receive the support it needs from us. We can tell you more about CPUs and how to choose the right one for your organization.