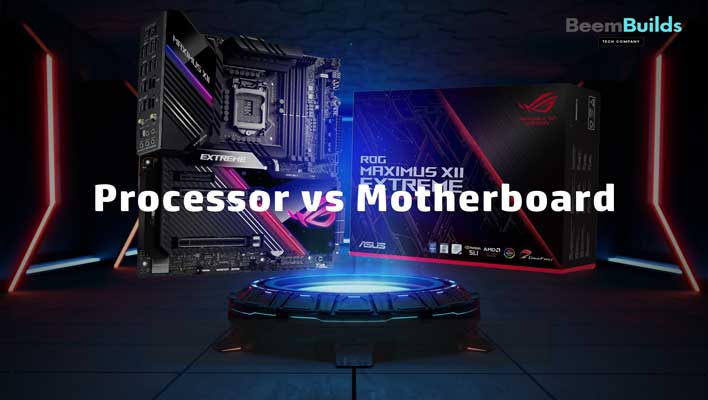 In general, the main difference between Processor vs Motherboard is that the motherboard allows communication between computer components such as the processor, memory and peripheral connectors, while the processor delivers instructions of a computer program to perform arithmetic, logical and control operations specified in the program.

CPUs, memory, and peripherals can communicate with a motherboard, instead of a processor. A processor is a component of a computer that carries out instructions for computing. check also b550 vs x570

What is a Motherboard?

Printed circuit boards act as the main interface between a computer and other peripheral devices. These components communicate with each other as well as with other system components, such as the central processing unit and memory, and provide connectors for other devices. 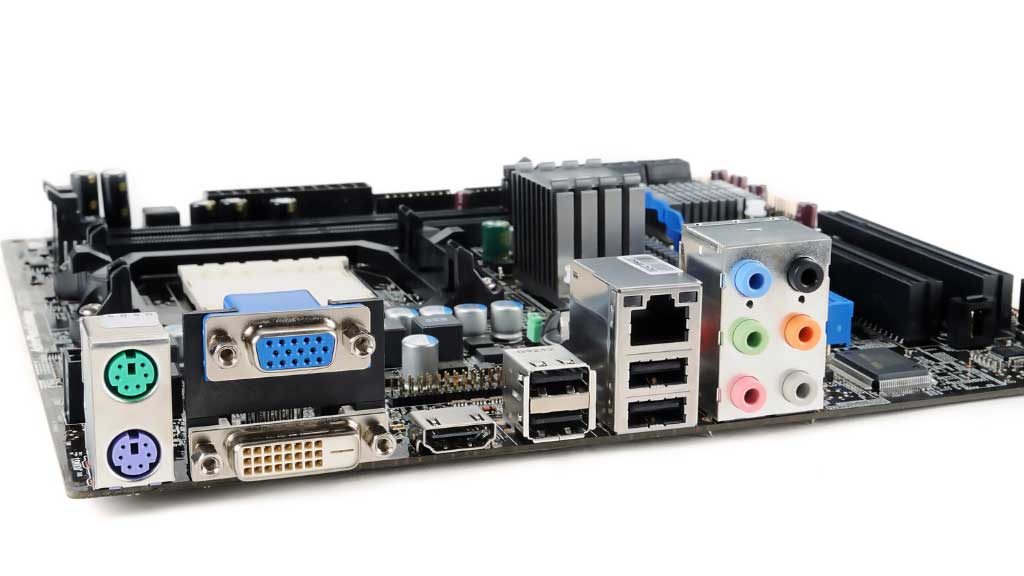 Here, we have a list of the different types of motherboards along with a description of their looks and features.

This is an ancient type of Motherboard. AT refers to the Advanced Technology (AT) power connector, whether they have them or not. From the mid-1980s to the mid-1990s, AT motherboards were between 13.8 and 12 inches. On this motherboard, new drives cannot be installed. Below is an image of an AT Motherboard, which was used in the 286/236 and 436 computers.

At the time of its development, this Motherboard configuration was called Advanced Technology eXtended and is still used today. Compared to the previously working Motherboard, such as AT, the ATX has improved greatly.

There are many variations of ATX Motherboards (including microATX, FlexATX, nano-ITX, and Mini-ITX). ATX boards range in size from 12 by 9.6 inches to 16 by 19 inches. Also, the ATX Motherboards have been upgraded quite a bit in recent years.

Overclocking is superior when all factors are taken into account. It is also worth noting the spacious ATX full-tower and mid-tower cases that can fit a half dozen fans, water cooling setups, tall heat sinks (for the CPU and RAM), and so much more.

The type of Motherboard used for conventional computers. It also comes with features like overclocking, USB 3.0, USB 3.1, thunderbolt expansion, and liquid cooling. Therefore, these motherboards are the best for building PCs that have mind-blowing components. 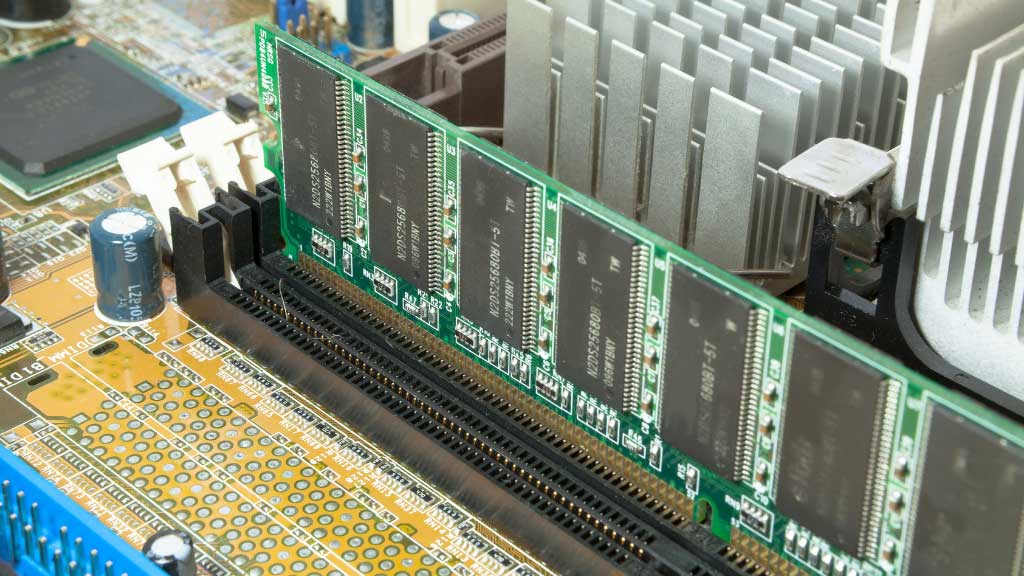 Motherboards are composed of various components that each play a specific role in the functioning of a computer. A typical Motherboard is described in detail below. We will describe each component below.

In expansion slots, such as a WiFi card, a network card, and a sound card, extra memory may be inserted.

There have been only a few expansion slots on Motherboards since the early days. The black color of the AT boards identifies them. These slots were used to install displays or sound cards. Industrial Standard Architecture is the full name of this 16-bit bus.

PCI stands for Peripheral Component Interconnect. In today’s world, PCI slots on Motherboards are one of the most important components and are widely used for adding more cards to the board. Unlike the PCI bus, the PCI high-speed bus supports 64-bit data.

They are Motherboard’s newest and fastest component for adding on cards, also known as PCIe. The serial bus supports full-duplex operation.

An AGP (Accelerated Graphics Port) is a specific interface for installation of graphics cards. AGP is also a popular option for gaming display cards, along with PCIe.

Single inline memory modules are the full form. Motherboards with these slots were found as far back as the 486. The SIMM supports a 32-bit bus.

Dual inline memory module is the full form of DIMM. They run on a faster 64-bit bus that runs on the latest RAM slots. SO-DIMMs are the DIMMs used on laptop boards.

In order for a CPU to be installed on a Motherboard, the CPU socket is essential. These sockets are explained below.

This system is commonly referred to as the Basic Input Output System, or BIOS. The Motherboard component is an integrated chip. The BIOS chip stores all the information and settings of your Motherboard, which can be modified via the BIOS mode in your computer.

Motherboards are connected to SMPS via connectors.

An AT connector consists of two sets of six male pins and is used on old types of motherboards.

They are either 20 pin or 24 pin female connectors. The ATX connectors are the latest in the power connector series. Featured on all the latest types of Motherboards.

What is a processor (CPU)?

An embedded system can have a variety of processor types. There are five types of general-purpose processors, Microcontroller, Microprocessor, Embedded Processor, DSP, and Media Processors.

Various kinds of memory and external connections, such as interrupt lines, lines for memory access and ports for communication, may be present on a chip. Inputs and outputs can both be programmed using these ports, so we can use them either way. The following are general-purpose processors that can be used with Linux.

Embedded processors control electronic and mechanical functions simultaneously. A processor, a timer, and an interrupt controller are part of the system.  The program memory and the data memory, the power supply, the reset and clock oscillator circuits, the application-specific circuits, and the ports and interfaces.

A multiprocessor is a computer with multiple CPUs. A tightly coupled system is one in which one CPU shares memory, a bus, and peripherals. Multiprocessors feature increased performance, reliability, and scalability. Processors like these are used when a large amount of data needs to be processed at a rapid pace.

Difference Between Processor vs Motherboard 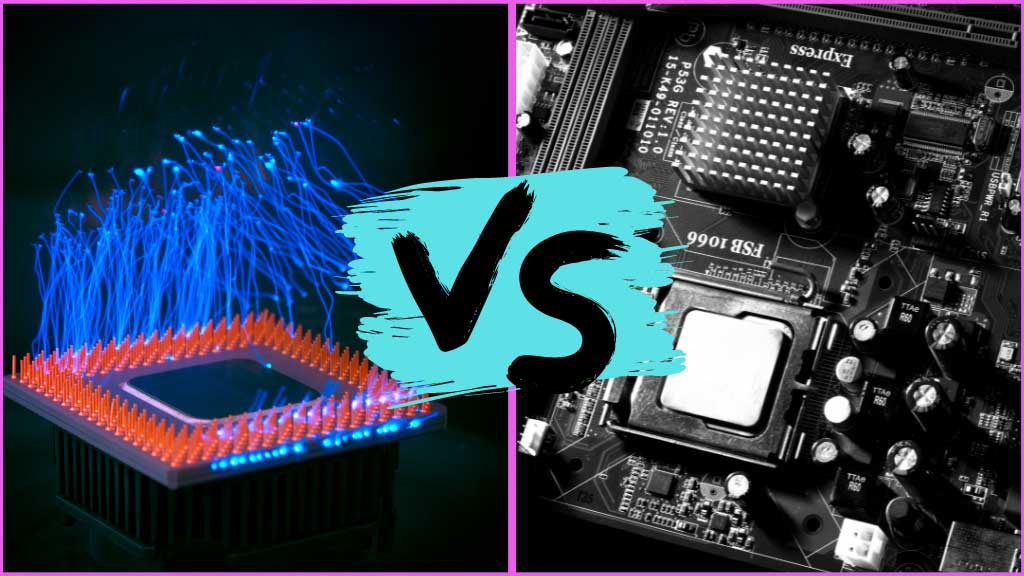 There are two basic parts of any computer: the motherboard and the CPU. The CPU and motherboard must both perform critical functions to run the operating system and programs of the computer. Motherboards provide connections among computer components, while CPUs do the actual computation and data processing. The hard drive of an office computer can be replaced, with some restrictions, but replacing the motherboard requires rebuilding the entire system.

Most of the computations and functions required to run an operating system on a computer are handled by the CPU. A processor may handle all the data for a system, while an add-in card, such as a graphics card, may offload some of it. When it comes to determining the speed of a computer, the processor is more important than the graphics card.

What is the difference between a processor and a motherboard?

The two computers perform their tasks at vastly different levels, so there is a huge difference between them. They differ in this way. PCs work better and communicate better when they have a solid motherboard to power them. The motherboard is organized for PC reasons.

Your motherboard connects every function of your computer so that it can work smoothly. As a result, the processor distributed proper instructions to all other components of the PCB.

Which is more important, the processor or the motherboard?

In comparing the processor vs. motherboard, we can find which one is more important. PCs cannot function without a processor. Since it sends instructions to the different components, it plays a vital role in the motherboard’s performance.

What is the relationship between the motherboard and the processor?

Quite simply, these two computers’ components are not the same because their functions, compatibility, and designs differ. This explains and organizes all the logical and arithmetic aspects of computer operation by the computer processor.

Like memory, processor, and other peripherals, the motherboard creates a new connection among the different components of the computer.

How long do motherboards maintain their processors?

When it comes to the computer, the processor is the most important component. Even though the motherboard supports just one socket, the central processing unit (CPU) initiates interactions with other components of the system.

Memory, storage, and various other devices are established in extension slots as well as inward and outward devices.

Are motherboards and processors the same thing?

The processor performs computations while the motherboard provides a platform for connecting the components of the computer.

Does the CPU function as the motherboard?

Computer cases contain components that perform specific roles inside. A mother board is a flat, large piece of silicon, and a central processing unit (cpu) is a network of chips installed on the motherboard.

How important is it to have a good motherboard or a good processor?

When compared to the motherboard, the processor is the most important part of the computer. Additionally, there is a processor socket on the motherboard that starts the communication between other important features and your central processing unit (CPU).

All of your confusion regarding Processor vs Motherboard will be resolved in our final decisions. It is not common knowledge that motherboards and processors perform various tasks. They perform an array of functions and assist the computer in maintaining its reliability.

There is one major difference between a processor vs motherboard that we consider, which is that a motherboard allows communication and creates contacts between various PC components such as processors, memory, and expansion slots and peripherals.

As a result, all the computer’s performance is intrinsically linked to the processor as it delivers its instruction and teachings to the various components to ensure that they perform authentically and reliably.

You may have to rebuild a new motherboard if your CPU is damaged out of date. There is no problem, since CPU sockets are established after a few years.